The number of people eligible for NHS Continuing Healthcare funding (CHC) in England has fallen – again. The most recent figures[1] have just been published and show that in the last quarter there were 54,754 people assessed as eligible for support – a reduction of 1,150 over the last quarter.  Four years ago there were 63,000[2] people eligible – and since then the number has fallen by 8,246: a staggering 13%.

The situation is, in fact, even worse: since 2014 the NHS has shed 7,268 over-night beds.[3]  However, even if one ignores this loss, the impact on these reductions (on patients, families and councils) is dramatic.  If one simply focuses on social services authorities and if one assumes that they only have to fund 50% of those no longer eligible for NHS CHC[4] – it will cost each one each year on average more than £1 million.  If one includes the impact of the beds shed by the NHS, the cost is significantly more.

In 2000 the English Government accepted that it had ‘too few hospital beds per head of population compared with most other health systems’[5] and in 2013 the former Department of Health National Clinical Director for Older People’s Services said that it was fanciful to expect significant reductions in the numbers of older people in hospitals.[6] Nevertheless this is exactly what has occurred – and the figures (detailed above) are dramatic. 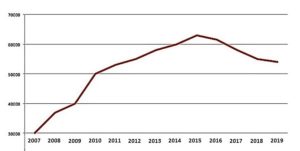 In the face of the unprecedented central government funding cuts that councils are experiencing, one would have expected their senior officers and members to be more than a little vocal about this highly inappropriate example of cost shunting – and yet there is not even a perceptible whimper.  What is it about local authority leaders that make them so willing to reduce care and support packages and to hike the care charges for disabled people and yet be so supine when it comes to the NHS?